The Mazda MX-5 RF in Barcelona and Heritage Roadsters 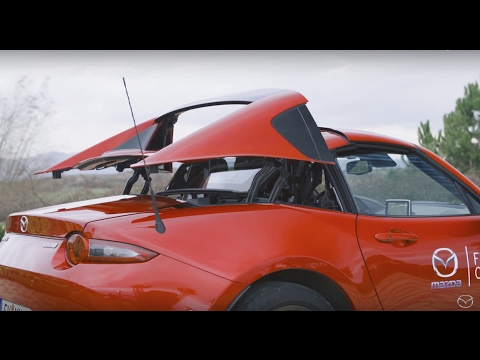 The all-new Mazda MX-5 RF is almost with us, so to celebrate, Mazda UK sent some ‘lucky YouTubers’ to the ‘amazing roads’ of Barcelona for a test drive. The group was taken to ‘Mazda Space’, an exhibition of all Mazda models, past, present and future. The ‘Mazda Space’ serves as a hub for the company’s European events, and exhibits new cars in the heart of Barcelona with the purpose of allowing customers to ‘fully experience and follow the Mazda brand’. The YouTubers were given the opportunity to mix with executives and designers at the all-new Mazda MX-5 RF preview event, and later they were given a red all-new Mazda MX-5 RF to test drive.

The new addition to the Mazda MX-5 family was particularly praised for its ‘amazing handling of corners’ and being the ‘best-looking Mazda MX-5 by far’. With this in mind, Mazda UK took a look back at some of the other ‘iconic heritage models’ at the ‘Mazda Space’ exhibition. The 1967 Cosmo, known for being the first Mazda to ever feature a rotary engine, was highlighted as a must-see at the event. Further, the Le Mans special edition Mazda MX-5, built to mark Mazda’s victory in the famous 24 Hours of Le Mans race, and the 10th and 25th anniversary Mazda MX-5 models were two more of the popular attractions.

Back
Book A Service
Vehicle Valuation
Compare Saved Vehicles
Top
Close
Your Cookie Settings
Select your cookie settings
Strictly Necessary Strictly Necessary cookies are essential to let you move around the website and use its features, such as accessing secure areas, shopping baskets and online billing. These cookies allow our website to provide services at your request.
Functional Functionality cookies are used to remember the choices you make, e.g. your user name, log in details and language preferences. They also remember any customisations you make to the website to give you enhanced, more personal features.
Targeting Targeting cookies collect information about your browsing habits to deliver adverts which are more relevant to you and your interests. They also measure the effectiveness of advertising campaigns.
Save Settings
Cancel Changes

Your settings will take affect when you refresh the page or move to a new page. Find out more about cookies

This site uses cookies and related technologies for site operation, analytics and third party advertising purposes as described in our Privacy and Data Processing Policy. You may choose to consent to our use of these technologies, or further manage your preferences. To opt-out of sharing with third parties information related to these technologies, select "Manage Settings" or submit a Do Not Sell My Personal Information request.